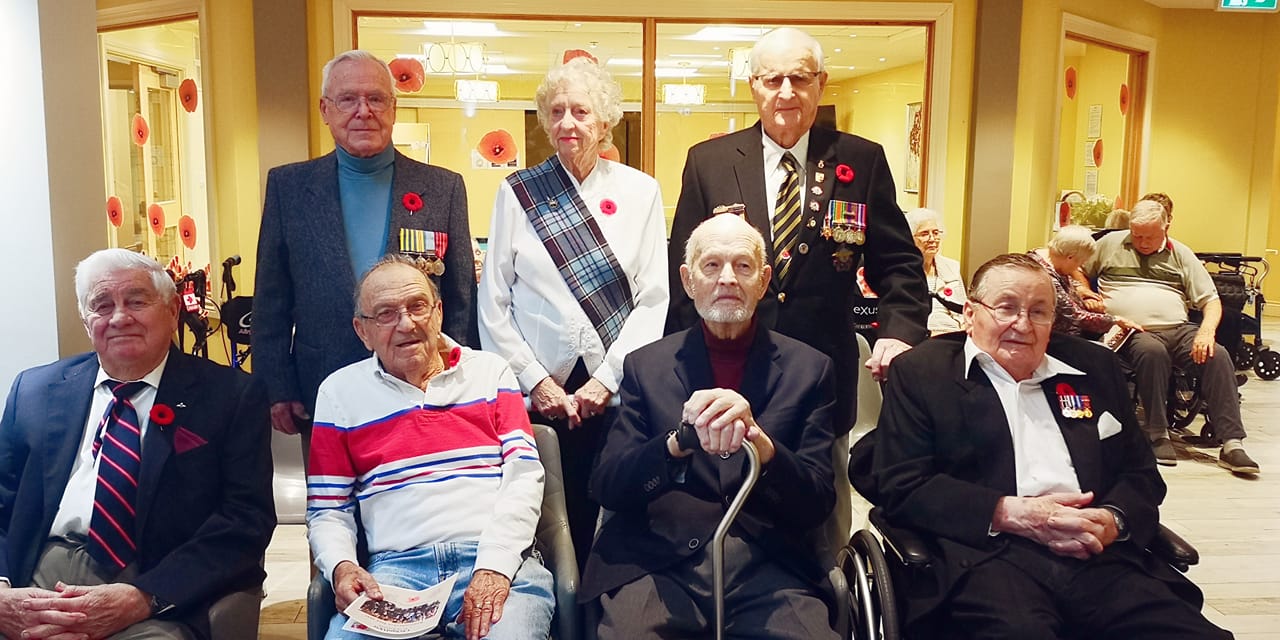 Joanna is one of our veterans at Orchard View. She is also a researcher and guest speaker on a variety of topics that she gathers from scientists from around the world. On this Remembrance Day she shared with us a poem and facts about the wars that she was involved with.

” A poem by Randall Jarrell (1914-1965). Randall Jarrell was an American poet. He was the 11th consultant in poetry to the Library of Congress, a position that now bears the title Poet Laureate. His best know poems are about the Second World War.

In our new planes, with our new crews, we bombed the ranges by the desert on the shore,

Fired at towed targets, waited for our scores and turned into replacements and woke up

One Morning, over England, operational.

It wasn’t different: but if we died it was not an accident but a mistake

(But an easy one for anyone to make).

We read our mail and counted up our missions –

In bombers named for girls, we burned the cities we had learned about in school –

Till our lives wore out: our bodies lay among the people we had killed and never seen.

When we lasted long enough they gave us medals:

When we died they said, “Our causalities were low. ”

They said, “Here are the maps”, we burned the cities.

World War II provide an unparalleled portrait of a war that changed the moral, economic and political state of the world. A one-of-a-kind strategic planning, maneuvering, and emotions of people with accuracy and compassion making history as never before. It called on people who had helped make Canada what is was and who used their love of work for peace.

Between September 1939 and September 1945 the lives of Canadian at home and in the services of our country were completely changed forever. It was the largest event in human history. During the course, an estimated fifty million people perished and even today the scale of mobilization involving human, financial and industrial resources is almost unimaginable. Missions across the globe sought refuge from the theatres of war to be replaced by soldiers of all creeds and backgrounds. There were times during the war when the allies came close to defeat. Families at home were glued to their radios worrying about their loved ones. The loss of a loved one was a telegram. The words echoed around the home, and it took days for a family to pull itself together and continue living, but their lives were never the same. For those that returned home, their lives were not the same either, there was happiness but there was sadness. Parents gathered their family together and continued as best they could, and continued to build Canada again.

The human cost of World War II was staggering. Precise figures are still not known. It was estimated that up to 60 million people lost their lives between 1937-1945 as a direct result of conflict. It involved the vast majority of the world’s countries – including all the great powers – forming two opposing military alliances.

The world has never seen a greater devotion, determination and self-sacrifice that had been displayed by the Canadian people. It was a nation that in saving it from the Nazi menace it thereby helped save the world.

This country of ours – CANADA, we should always be proud of it and its people.

In closing, remember these words;

In peace – good will.

Orchard View is putting forth a proposal for a variety of senior housing to help meet the demand of our seniors today and in the future. To learn more about the concept and support it for the Ministry...